The weather has been reasonably good for a number of days now, the only thing stopping teams from going for the summit is ropes. The ropes have been fixed as far as the South Col on Everest and Camp 4 on Lhotse. That’s where it’s stalled. There are no ropes to the summit on either mountain. Actually, Everest North side has been fixed, but that doesn’t help those climbing from the South, and doesn’t help me on Lhotse.

So how does rope fixing work? Well clearly it doesn’t work, but I’ll try and explain the set up. Now I don’t know all the ins and outs, so I may have the wrong end of the stick, but the following is based on what I’ve seen, heard and learnt so far.

Ropes from Base Camp, up through the Icefall, and as far as Camp 2 are installed and maintained by a group of Sherpas known as the Icefall Doctors. There’s a group dedicated to the task and it’s managed by the Sagarmartha Pollution Control Committee (SPCC). Each climber pays a fee which goes towards the costs. It seems to work pretty well.

Above Camp 2 is a different story. Supposedly, all operators on the hill, or at least the major operators, are meant to collaborate and volunteer resources to support the rope fixing effort. Each climber again pays a fee which goes in to a kitty and those funds are used to cover the costs of equipment and labour. But where it seems to fall over is; a) a lack of management and coordination, and b) teams hold back their best Sherpas to establish their own logistics on the hill so the rope fixing isn’t properly resourced.

There’s been meetings at Base Camp the past few days between expedition leaders to try and work out what’s happening and to resolve the situation, but from what I’ve heard, these meetings have broken down in a mass of finger pointing, with still no way forward. Meanwhile I’m growing ever more frustrated knowing that if the rope fixing was organised efficiently, I could have  already had a shot at the summit and be back in Kathmandu eating steak and drinking beer (either in celebration or commiseration). As I mentioned earlier, I don’t do the waiting thing well.

Anyway, while the adults continue to argue and point fingers, I am just trying to entertain myself and trying to stay fit and healthy with my daily walks to Kala Pattar, ready to jump when the opportunity arises. The rest of the clients in my group have gone down to Namche to wait in comfort, but I don’t like the idea of that. Things can change very quickly and Namche is a two day walk away, or a very expensive chopper flight.

From speaking with Tim, our expedition leader, we may be going for Plan B. In which case I’ll be out of internet range for the next 5 or 6 days. A snowy day on Kala Pattar 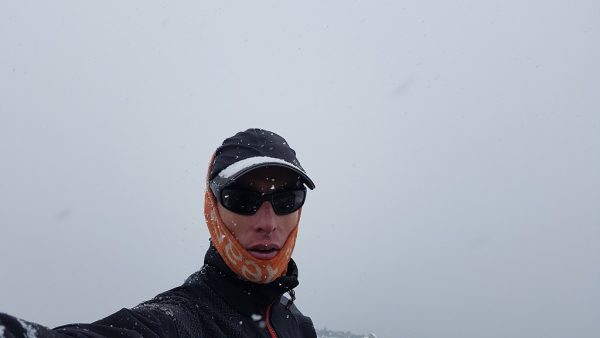 Believe it or not, behind me is one of the best views of Everest

Time to uncover my tent